A good one to know for all general surgery trainees and anyone interested in breast cancer surgery!

This publication by Giuliano et al. is such an important article to know and a critical piece of research which has since directed the treatment of women with early breast cancer. In this non-inferiority RCT women with early invasive breast cancer and non-clinical nodes were found to have similar outcomes whether complete axillary clearance was performed or not, with an obvious increase in morbidity associated with nodal clearance. Based on the results of this study, for patients with early-stage breast cancer and a clinically negative axilla, guidelines currently recommend mastectomy and sentinel lymph node biopsy rather than a complete axillary dissection.

END_OF_DOCUMENT_TOKEN_TO_BE_REPLACED 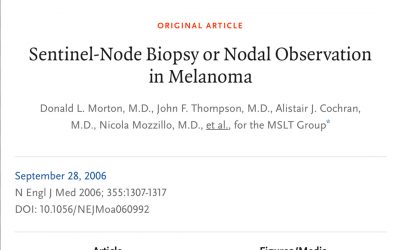 This RCT by Morton...